By Thomas B. Scheffey

A bill to turn CT-N into a “state civic network” was the subject of a public hearing on Feb. 22 before the legislative Government Administration and Elections committee, co-chaired by Sen. Steven Cassano and Rep. Ed Jutila.

“This is about the public’s right to know what its government is doing,” said Cassano, “And frankly, that helps us as legislators, and makes our job easier when the public knows what we are doing.”

An expanded CT-N would increase legislative coverage significantly and create a complete and searchable video archive of cases argued before the Supreme and Appellate courts. CT-N has previously aired Supreme Court arguments, legislative sessions and a limited number of legislative hearings and other public affairs events.

The bill’s strongest proponent is Paul Giguere, president and CEO of CT-N, who launched the non-profit, state funded network in 1999. It has been limited to covering two legislative hearings at a time, he noted. “On a busy day, it means 80 percent of what’s happening in that building is not being seen by people who are not in the building.”

“The reality of how citizens consume their media – you may not want to sit there and watch a 12 hour hearing… but when it’s finished, you’d be able to go in and search for what you’re looking for, and to mark an in-point and an out-point and to share that clip, I think is incredibly powerful,” Giguere said.

The new CT-N would no longer be funded by the state, saving $3.2 in expenditures from the General Fund, Cassano said. Under the proposal, it is to be funded by cable TV subscribers under the same federal law that launched CSPAN, the national network that began televising the U.S. Congress in 1991.

Currently CT-N is not a “must carry” station for cable TV, but that would change under the new bill, Giguere said. Currently, CT-N is in a regulatory vacuum. “Currently, we’re not a broadcaster. We’re not a traditional cable channel like ESPN or CNN. And we’re not even defined as a local community access channel,” he said.
Under the federal law, 47 USC Sec 531, as a state civic network, CT-N would be regulated like a utility, by PURA, the Public Utilities Regulatory Authority. “It’s part of that regulatory framework that the cable channels must carry, and they’re funded through the cable companies in the same way.”

Giguere said that this option has been legally available for almost two decades. “We didn’t know when we launched CT-N that we could have done this 18 years ago. The law gives to state regulatory authorities the ability to require cable channel capacity and funding for a network like this. All the bill does is define a state civic network within that framework.”

An expanded CT-N would not only provide greater access to citizens seeking to watch their government in action, it would also help reporters covering government, which in turn benefits the public.

“The real power for the journalist is to be able to go in and pull certain pieces of that meeting and then imbed them in the story. That’s really the future of where journalism is heading,” Giguere said. “So this puts the process on the cutting edge of that, and makes it much easier for journalists to do their job more effectively, and the broadcast media as well would have access to the feeds. We would hope it would encourage the news media to pay more attention to what’s happening in the all the branches.”

Chief Justice Chase T. Rogers said in a statement, “One of my top goals since becoming Chief Justice in 2007 has been making the Judicial Branch more transparent and accessible to the public. We have worked with CT-N for many years so that it may expand coverage of oral arguments at both the Supreme and Appellate Courts.” Appellate lawyer Jeffrey Babbin, of New Haven-based Wiggin & Dana, was enthusiastic.

“It’s great news,” he said. Because the appellate system has recently adopted E-filing, providing briefs and appendices of all cases, “rounding this out with easily- available [videos of] oral arguments, online, makes the record complete.”

Babbin said the streaming video of oral arguments, on demand, would be a valuable tool for research, education and client service. Lawyers who are new to appellate argument could learn a lot from the archive, Babbin said. Proloy Das, an appellate lawyer at Murtha Cullina in Hartford, said the video helps him research of a case.

“What I like to do, when there’s a video of the argument available, is first read the decision and then watch the oral argument, and put the issues in context. Public policy concerns the court may have had, and specific legal concerns get fleshed out in the oral argument. You can see how the written decision gets shaped.”

Babbin said he’s been filmed by CT-N at the Supreme Court on many occasions. “I’m usually oblivious to the camera, but I’m always happy afterwards to be able to review it, and send it to clients who are unable to attend. Just like they see our briefs, they can see the oral argument. It’s nice for the client.”

Sen. Cassano noted that there are significant Supreme Court arguments coming up of vital importance to the state’s citizens, such as the landmark school funding case argued last month. Cassano said the politically-charged atmosphere of the current election year, and public distrust of government, makes it harder for lawmakers to function. “If people get to see the process in action,” he said, it improves the communication from the public.

Giguere’s belief in citizen involvement in government goes back a long way.  Back in 1984, he was an Enfield firefighter, on the extrication team of a gruesome head-on collision caused by a drunk driver. “We didn’t think she was going to survive. She had traumatic brain injury, and is still paralyzed on the left side of her body, in a wheelchair. I’m still in touch with her.”

When he and his fellow firemen learned the driver would probably face no jail time, he resolved to do something about it.

He went to testify at the Capitol, but the process was intimidating.  He watched, but did not speak. “I was too intimidated, and I left without doing anything. That was really the seed that started CT-N. If ordinary people would have an opportunity to watch this for themselves, and see what the process is. That you sign up, that you only get three minutes – ordinary people would be able to participate in a meaningful way. And that was what we did in 1998, when we created the non-profit, and went on the air in 1999.

And you know what?  The world has changed, and it’s time for us to take the next step in the evolution, and keep up with citizen needs.”

The statement of purpose behind a state civic network is simple, but profound, Giguere said. “The idea is, that public participation in government ‘depends on the full, free and reliable access to the deliberations and decisions of state government” using technology “to overcome the barriers of time, distance and complexity that separate government from the governed.’” 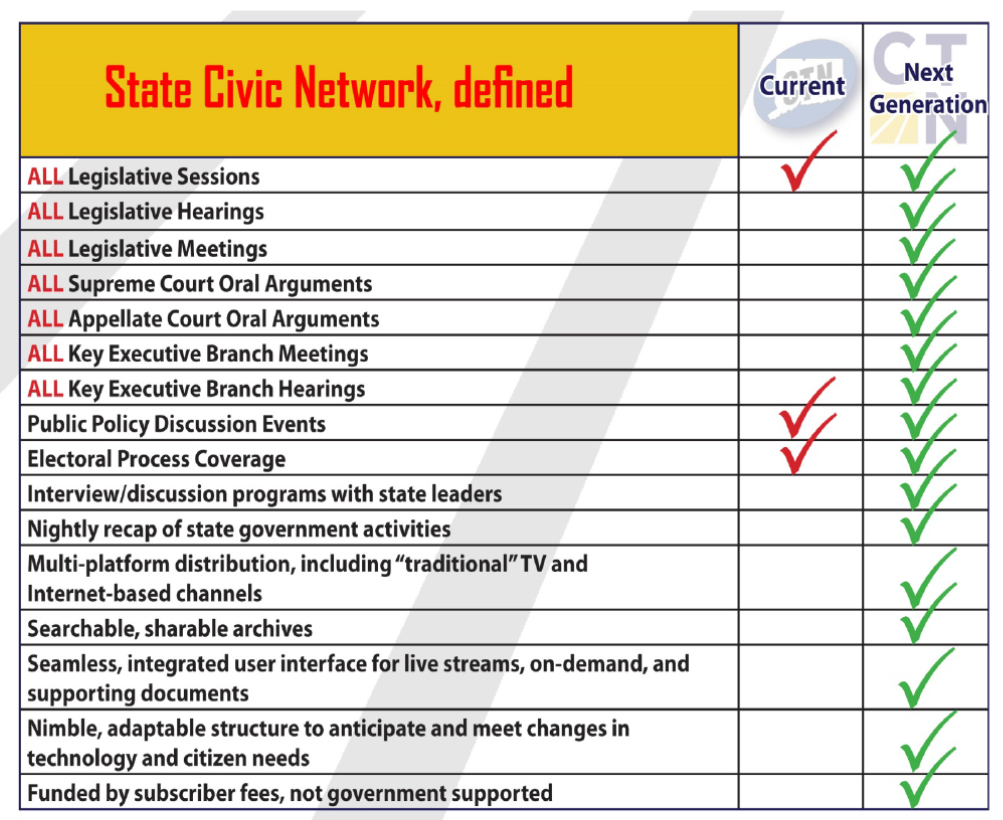